Stirling MSP Bruce Crawford has submitted a motion to the Scottish Parliament, wishing representatives from a number of organisations the best of luck as they take Stirling’s bid to be European Volunteer Capital 2020 to Brussels. 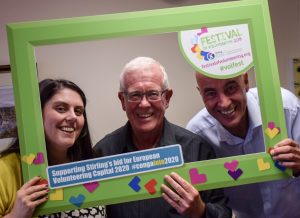 Volunteer Scotland, Stirlingshire Voluntary Enterprise and Stirling Council will present the case to a panel of judges on Thursday. Stirling is one of two European cities being considered – the other being the Italian city of Padua. 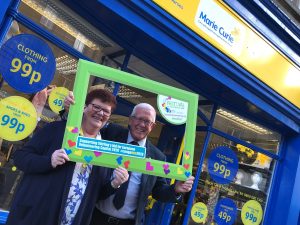 With Morag Hunter, manager of the Marie Curie shop in Stirling

Mr Crawford’s motion points out that Stirling’s bid includes plans for a year long festival of volunteering, aimed at increasing the number of local people who volunteer – currently at about a third.

“This is an exciting bid for Stirling, and I wish the representatives taking our case to Brussels this week the very best of luck.

“Having met with representatives from Volunteer Scotland, Stirlingshire Voluntary Enterprise and Stirling Council to discuss this bid, I know the incredible work that has gone on behind the scenes to make the strongest case possible for Stirling to win this title.

“This has such great potential for Stirling, which benefits massively from the contribution of those in the voluntary sector.

“I am pleased that many MSP colleagues have already signed my motion, wishing those making the bid the very best of luck. We are all cheering them on.”

That the Parliament wishes representatives from Volunteer Scotland, Stirlingshire Voluntary Enterprise and Stirling Council the very best of luck as they take Stirling’s bid to be European Volunteering Capital 2020 to Brussels, making their case to the judging panel; notes that Stirling is going head-to-head with the city of Padua in Italy for the title; considers that volunteers make a huge contribution to local communities; understands that part of the bid includes a year-long festival of volunteering that aims to increase the number of local people who volunteer from the current rate of around a third, and considers that winning the bid would be a highly positive result for Stirling’s voluntary sector.

Stirling MSP Bruce Crawford and local councilor Evelyn Tweed have welcomed an announcement by the SNP Scottish Government that B&Bs across the Stirling area will be eligible for a lockdown grant. Businesses can receive a Read more