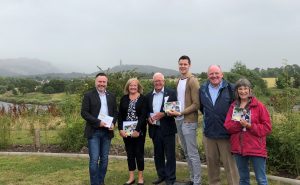 The canvassing exercise takes place in a constituency that voted 67.7% to Remain in the EU during the 2016 referendum, and at a time when there is growing fear over a no deal scenario with the EU after Brexit.

“These are very uncertain times and, as the date of leaving the EU is drawing ever closer, residents and businesses in my constituency are growing increasingly concerned that little progress has been made to secure a deal that will avoid damage to Scotland’s economy.

“I am pleased that local people had a chance to hear from Alyn Smith, who has been at the heart of discussions in Brussels and Strasbourg, fighting for the best possible outcome for Scottish trade, businesses, jobs and people.

“The SNP have remained committed to fighting for retention of our Single Market and Customs Union membership if we are to leave the EU. Economic analyses of both the Scottish and UK Governments have found this to be the least-worst option in terms of the impact it would have on our economy – and it is clear that this is the sort of sensible approach that my constituents, who voted by nearly 69% to remain in the EU, want to see happen.”