Stirling MSP Bruce Crawford has backed the local campaign by the Stirling Observer to end the high unreasonably high prices set by Vue Cinema in Stirling.

Following these revelations, Mr Crawford wrote to the Chief Executive of Vue Cinemas, calling for a review of the unreasonable pricing of tickets at their Stirling venue. The response that Mr Crawford received did not commit to any such review, nor did it offer an explanation as to why Stirling residents and visitors were being charged much higher rates than other people across the country for tickets at Vue Cinemas. 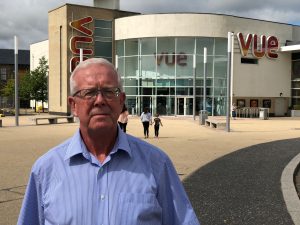 Mr Crawford has now signed the Stirling Observer’s online petition, calling for Vue Cinemas to “end rip off ticket pricing” at their Stirling cinema, and is encouraging others to do the same.

“I am surprised that local Vue Cinema ticket prices are being charged at such a high rate – especially when compared to the rest of the country. There is absolutely no reason whatsoever for Stirling Vue to be the most expensive in Scotland.

“Cinemas continue to play an important role in providing social activity and in supporting the film industry. As the culture of how we watch movies has evolved, with more people streaming movies and television than ever before, cinemas need to do all they can to keep people coming back.

“I wrote to the Chief Executive of Vue Cinemas, asking for a detailed reason as to why Stirling is priced to be the most expensive cinema in the country. I am disappointed that the response I received did not respond to the specific concerns that I raised, namely that there is such disparity between what Vue expects consumers to pay for a cinema ticket here in Stirling, compared to elsewhere across Scotland.

“I fully commend the efforts of the Stirling Observer on raising this matter, and support their petition calling for Vue to seriously reconsider their position here.

“Businesses have to listen to the people that they rely on the support of, and I would urge local people who feel the same way I do about these absurdly high prices to make their voices heard and support the Observer’s campaign.”