At the turn of the 18th century when literary giants such as Sir Walter Scott, the Wordsworths and Coleridge ventured on some of their epic journeys to discover ‘the raw beauty of Scotland’s scenery’ they sheltered in what were described as ‘rudimentary huts with bracken roofs at the eastern end of Loch Katrine’ and their writings subsequently led to Scotland’s first tourism boom. 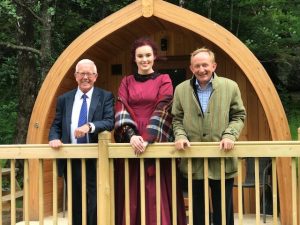 A couple of huts were provided by Lady Drummond of Perth, the local landowner, who was concerned to ensure there were shelters for these early travellers drawn by the sheer beauty of Loch Katrine which Sir Walter Scott described as ‘’the scenery of a fairy dream’’ in his blockbuster poem Lady of the Lake, published in 1810. 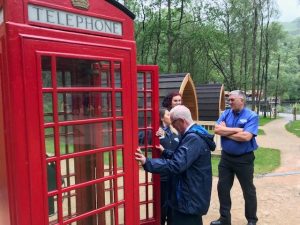 A working telephone box is available for visitors

Next to the spot where these huts stood, an imaginative venture by the Trust charged with sustaining the 119 year old Steamship Sir Walter Scott, has led to the development of a cluster of more luxurious eco timber lodges and a small camp ground in the shadow of Ben Venue on the lochside which is part of the Great Trossachs Forest National Nature Reserve and a designated Site of Special Scientific Interest in the heart of the Loch Lomond and The Trossachs National Park.

‘’This is an unusual, but essential, investment by the Trust as we strive to diversify our income streams to support the continued operation of the historic Sir Walter Scott Steamship which is expensive to maintain and brings so much pleasure to tens of thousands of visitors each year. 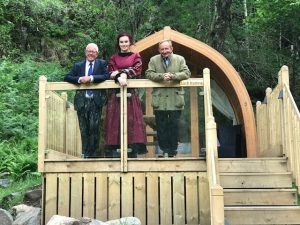 ’’I am confident the £300,000 eco camp development will be popular with city dwellers and others as they seek to re-connect with nature in such as stunning setting and, importantly, the income generated from their stays will help to keep the steamship running for many years to come.’’

The new eco camp, which consists of 8 eco lodges (4 en-suite and 4 standard), 8 camping pitches, a shower and toilet block and some campervan stances with electricity, water and wifi hook ups, has been designed in a very careful way with strong eco credentials given its location in an environmentally sensitive site so close to what is a major reservoir supplying, as it does, over 150 million gallons of water daily to households in Glasgow and Central Scotland.

Dr Michael Cantlay, Chair of Scottish Natural Heritage and Bruce Crawford, MSP for Stirling have both been strong supporters of the Steamship Sir Walter Scott Trust over the years and they officially opened the new Loch Katrine Eco Camp today (Monday 18th June). 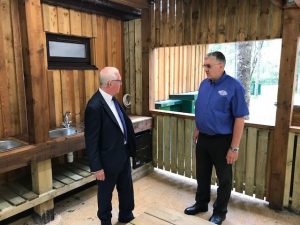 ’’This is a really bold investment by the Trust and one which I wholeheartedly endorse as it has led to the creation of much needed high quality glamping facilities in a stunning environmental setting where Scottish tourism began a couple of centuries ago.

‘’ This development demonstrates that contemporary tourist facilities can be developed on an environmentally sensitive site in a sympathetic way while providing great opportunities for people to enjoy Scotland’s outdoors and rich natural heritage.’’ 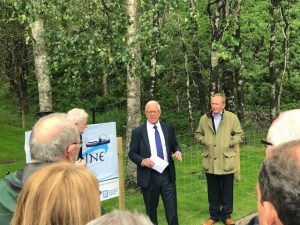 Bruce speaking at the opening

Bruce Crawford, MSP for Stirling played an important role in helping to secure the future of the steamship 12 years ago when a £1.75 million funding package was secured from the Scottish Government and Scottish Water for major refurbishment work and he has welcomed this latest move to provide tourist accommodation at Loch Katrine as part of strengthening income streams to sustain the steamship operation. 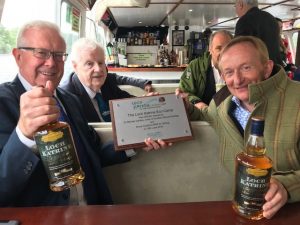 ’’The Steamship Sir Walter Scott is an important part of Scotland’s diverse and rich cultural heritage and I am delighted the Trust members have had the foresight to invest wisely in diversifying the visitor offering at Loch Katrine and in a way that builds on the great tradition of welcoming visitors to this very special part of Scotland.

‘’I wish the Trust every success with this new venture which I am sure, if she was alive today, the late Lady Drummond of Perth who, 230 years ago saw the need to provide accommodation and shelter for Scotland’s first early travellers, would fully approve of as the Trust responds to the needs of modern day tourists.’’

‘’Camping is a fantastic way to enjoy the National Park and we are delighted to welcome the addition of the new camping and motorhome pitches as well as the eco lodges at Loch Katrine, alongside the historic Sir Walter Scott steamship, which is one of the area’s most popular tourist attractions. This is a great example of diversification to meet changing demand and enhance the overall visitor experience.’’

The new eco camp was funded by the Trust from trading reserves and a £50,000 grant from Forth Valley & Lomond LEADER programme and has the triple aims of capitalising on the growth in demand for glamping, contributing to the National Park Authority’s current camping initiative as well as generating an important new income stream to support the historic steamship.