The Scottish Parliament echoed to the music of Pirates of the Caribbean and the Skye Boat Song when children from Big Noise centres across Scotland performed together for the very first time for the First Minister, Nicola Sturgeon and cross party MSPs at a special 10th birthday reception today (Wednesday 23rd May 2018).

The reception, in the Garden Lobby of the Parliament, was compèred by writer and broadcaster Sally Magnusson, Board Member of Sistema Scotland, and told the story of Big Noise through musical performances, songs and interviews featuring more than eighty children from the four Big Noise centres: Raploch (Stirling); Govanhill (Glasgow); Torry (Aberdeen) and Douglas (Dundee). 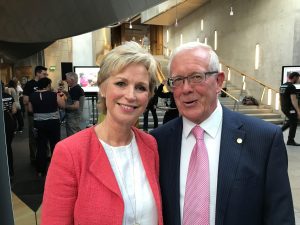 Sistema Scotland, the charity which runs the Big Noise programmes, was launched by Richard Holloway in Raploch, Stirling in 2008 with thirty five children. Now more than 2,500 children take part in the programme every week. As Big Noise Douglas was only set-up in September last year this is the first time the children from all four centres have performed together.

Independent research shows that Big Noise is transforming the lives of children through music and strengthening disadvantaged communities. It uses the symphony orchestra and learning a musical instrument, via an immersive and intensive programme, as the tools to equip children with a wide range of social and life skills including confidence, resilience and aspiration.

The reception – held during Scotland’s Year of Young People – was sponsored by Bruce Crawford, MSP for Mid-Scotland and Fife, who put forward a motion today in the Scottish Parliament, which received cross party support, commending the work of Sistema Scotland and the Big Noise programme. 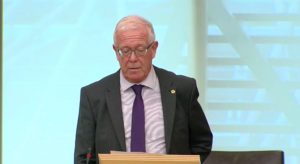 The First Minister, who gave a keynote speech at the reception, also joined the children, their families, MSPs and guests to sing The Hello Song, which is the first music children learn when they start the programme. The performance was filmed for the Big Noise #100BigHellos social media campaign which was launched earlier this year to mark the 10th birthday. 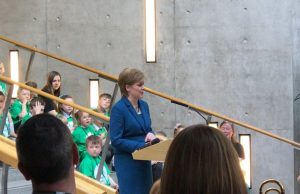 Independent research by The Scottish Government, Education Scotland and the Glasgow Centre for Population Health (GCPH) has consistently found that Big Noise has a wide range of positive impacts on children’s lives. These include engagement with education, developing life skills, securing emotional wellbeing, building social skills, encouraging healthy behaviours and offering respite and protection for some of our most vulnerable children.

“Sistema Scotland has dramatically extended its reach since it began its ground-breaking work ten years ago and I congratulate everyone involved. It is particularly fitting they are celebrating this landmark achievement during the Year of Young People.

“The Scottish Government believes that a young person’s background should not have any impact on their ability to take part in culture, or to benefit from the immeasurable benefits the arts can bring. Through its creative, empowering and energising approach, and with the support of the Scottish Government and others, Sistema Scotland have helped thousands of young people to reach their full potential and fulfil their ambitions over the past decade and I hope they will continue to do so for many more years to come.”

There was cause for a double celebration as children from the Big Noise Primary Schools String orchestra performed together for the first time in public and the Big Noise Douglas Choir also made its debut appearance. They were joined by the Raploch Lower Brass Ensemble and Lewis Sinclair (18) from Big Noise Raploch delighted guests with a solo finale of the Skye Boat song on oboe. Lewis is the first Big Noise musician to be offered a place to study at the Royal Conservatoire of Scotland in Glasgow.

Big Noise Douglas children, Amy Douglas (cello) and Jamie Petrie (violin), both (8), presented Nicola Sturgeon with a paper violin and drawings made by the children of the positive impact Big Noise has on their emotional outlook.

Richard Holloway, founder and Chairman of Sistema Scotland, told MSPs at the reception:

“There is no quick and easy fix to the poverty and inequality that still darkens the dream of a fairer Scotland. When we set-up Sistema Scotland 10 years ago we knew we would have to commit ourselves for the long haul. Social transformation is slow work that can only be measured over many decades. So I hope you’ll stay with us and these brave children as we embark on the next ten years and the ten years beyond that.

“We are grateful to everyone who has helped and encouraged us over the last ten years – not least the strong support of the Scottish Government, local authorities in Stirling, Glasgow, Dundee and Aberdeen, the charity Optimistic Sound, and MSPS of all denominations. Thank you for sharing our dream. I beseech you: don’t ever let its sweet music die.” 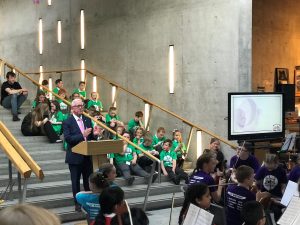 “It’s a privilege to host Sistema Scotland at the Scottish Parliament on the 10th anniversary of the first Big Noise orchestra in Raploch, Stirling. The work that Sistema Scotland do in areas of multiple deprivation makes a huge difference to children, families and communities.

“Their strive for social transformation through an inclusive programme of music is an inspirational idea that has been proven to work in many areas of individual development. I look forward to many more successful years of Big Noise.” 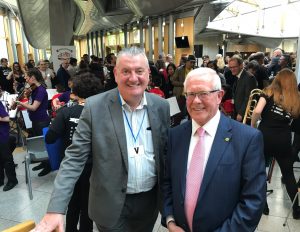 £159,200 paid to families in Stirling from Scottish Winter Hardship Fund

1592 families in Stirling have received a £100 COVID winter hardship payment to support them through one of the most difficult winters in living memory. New figures show that the SNP Government provided support to Read more